Everything about your short mattress can be customised, from its exact length to its width, depth and filling.

At The Odd Company we also use natural materials to fill all our mattresses. The natural fibres we use are hypoallergenic, breathable and have excellent heat regulating properties, making them fantastic materials to craft mattresses from.

At The Odd Company we produce mattresses to any shape or size – a service which represents the core of our business.

Over the last three decades, we’ve made bespoke mattresses of almost every size and shape, from a 300cm x 300cm mattress – a size we now refer to as the “Berliner” on account of the city in which it now resides – to curved mattresses which follow the contours of a yacht’s hull, as well as shorter than standard mattresses for Victorian, Georgian or continental beds.

Although an enquiry for a short mattress is usually unique there are certain dimensions for which, over the years, we have received numerous enquiries. These mattresses normally are of standard width but have a slightly shorter than standard length; for example, we can make a short single mattress, a short double mattress and a short king size mattress. These shorter-sized mattresses are often required for beds which were made before the onset of standardisation, in the mid-20th century. The most popular short mattresses from this period are found in the table below.

Only ever fully sprung…

Our bespoke, made to measure mattresses are always fully sprung. At The Odd Company, we only make fully sprung mattresses, as in our view, no other system offers your body a comparable level of support while you sleep.

When it comes to spring system there are two types to choose from; the interior spring unit, which is also known as a box spring, and the pocket spring. Both systems serve different requirements, but when it comes to supporting the contours of your body the pocket spring system found in our bespoke mattresses is by far the king. As the name suggest each 15 cm (6 inch) spring sits in its own individual fabric pocket. This allows each spring to be independent and move independently from those around it, meaning a pocket sprung mattress can adapt and fit to the contours of your body much more effectively than other types of mattresses like interior sprung mattresses or bespoke mattresses which have foam at their core. This independence also means that should your partner move during the course of the night – it’s estimated we all make upwards of 80 ‘measurable’ movements while we sleep! – you remain harmoniously undisturbed as there is no means by which these movements can transfer through the mattress.

Together with a soft natural filling described above, a pocket sprung bespoke mattress provides the ultimate level of comfort as well as posture alignment and muscle and joint relieving support.

Our short mattresses are perfect for use as children’s mattresses, or for short beds in small rooms. A number of our customers have opted for a short mattress with a standard width for their second bedroom or box room. Space can often be at a premium in these types of rooms, and a standard length may not be suitable. Opting for a short mattress means that these rooms can be used effectively with guests having the comfort of a bed with a double or king size width when they come to stay.

All our short mattresses offer all the comfort and support of our regular sized mattresses and are made from the same luxurious materials using the same traditional manufacturing techniques. Don’t compromise on comfort, just because you need a short or children’s mattress, choose us for a perfectly sized mattress that’s handmade with care and expertise.

Like our standard sized mattresses, we can produce your short mattress with cut-out corners or curved ends, to make sure your mattress fits your bed correctly. In circumstances where access may be difficult, your mattress can be made in two halves which are then zipped to link in situ. We also make divans of any length or width, with or without storage solutions, to be used in conjunction with your short mattress.

At the Odd Company, we use a question-led approach, to ensure that we can fully understand your needs and use our 35+ years experience to offer you the best possible advice.

All our short mattresses are hand tufted and finished in a 100% cotton cover. We only upholster our short mattresses in cotton due to its hypoallergenic qualities, breathability and soft feel, which together make it superior to manmade fibres. We also use natural fillings such as cotton, lambswool, horsehair and cashmere to ensure that your mattress has a truly luxurious feel.

A natural fibre which has been grown and harvested for the production of textiles and clothing for many centuries. This uniquely breathable and naturally absorbent filling is used in the construction of our mattresses due to its ability to naturally wick away moisture ensuring restful sleep.

A natural material which has played an important role in the British economy since the medieval period, and whose trade was once described as the ‘jewel in the crown of the realm’. Wool brings a number of benefits to a mattress. Unlike synthetic fibres which tend to trap and hold moisture and heat, wool’s structural composition makes it great at regulating temperature. Wool like cotton is also incredibly breathable, wicking away moisture and ensuring you stay cosy during winter months and cool during summer ones. It is thanks to these properties that we use it as a filling in some of our highest specification mattresses.

For hundreds of years horsehair has been an important filling in mattresses of the highest specification. Before the interior and later pocket spring system were invented each strand of curled hair acted like a tiny spring, creating support and elasticity within the mattress. We continue to use horsehair today for this exact same reason – think of it as providing an extra layer of natural micro-spring close to the sleeping surface, to complement the pocket sprung system found in the mattress core. Additionally, the fluted structure which each strand forms channels moisture and heat away from the body while you sleep, replacing it with cooler, fresher air over the course of the night.

The coat of the Kashmir goat is considered one of the most luxurious wool’s available, its fine fibres – half the width of sheep’s wool- make it incredibly soft and springy to the touch and therefore one of the finest fillings that can be used in your mattress.

The goats take their name from the Kashmir region in the Indian subcontinent in which they were first found, an environment which is subject to extreme fluctuations in temperature. Cashmere, like other wools, is therefore an excellent regulator of heat. It is best to think of cashmere as a natural, silent air conditioning unit built into your bed, the structure of each hair is such that it directs heat along the fibre to be released into the cooler environment. When it is cold, cashmere’s crimp – the natural waviness of each hair – traps large volumes of air between its fibres, creating an insulation layer which holds heat. 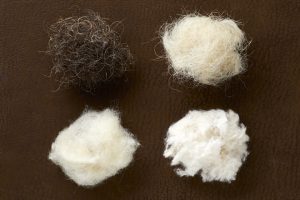 What size mattress do you need?

What's the intended use?

How much are you looking to spend?

Only the best will do!

Some lovely words from our Odd customers…

"I would not purchase a mattress from anywhere else. The advice we received was so helpful and the product was everything we were told it would be."

"The whole experience from first enquiry to order and then delivery was excellent. Your staff were unfailingly helpful. When it arrived, the mattress was superb too. It's just great to have a traditional product made by such an excellent company. Many thanks to you all."