Sleep like royalty on a four poster mattress, designed especially for your four poster bed.

Four poster beds are the ultimate in bedroom luxury, and throughout their history have been a symbol of sophistication and wealth. Described as the “the bed of kings, and the king of beds”, this often-ornate piece of furniture was highly sought-after by members of the noble and merchant classes and the monarchy. Louis XIV reportedly installed 413 four poster beds across his many royal residences including the Château de Fontainebleau and at his newly-built royal court in Versailles.

Four poster beds will generally require a specially-designed four poster mattress, which incorporates what are known as ‘cut-out corners’. At the Odd Company, our mattresses can be crafted with cut-out corners to accommodate four or two beds posts. Cut-out corners, however, haven’t always been necessary for four poster mattresses: before the introduction of spring technology, mattresses were crude, densely-packed sacks covered in a fabric ticking, the contents of which could easily move and mould around the posts of the bed. Whether you own a traditional four poster bed or a modern incarnation, it’s unlikely that you’ll want to sleep upon a sack stuffed with reeds or straw. Instead a mattress with perfectly-formed cut-out corners designed specifically for your bed is a must.

At The Odd Company, all of our pocket sprung four poster mattresses can be made with two or four cut-out corners to ensure a perfect fit. All we need to know is the beds length and width, the dimensions of the bed posts in either cm or inches, and the number of cut-out corners you require. Once we have these measurements, it’s then a case of choosing the type of fillings you’d like us to use, as well as the number of pocketed springs.

How many cut-out corners should you opt for?

It’s worth noting that although the mattress may only require two cut-out corners, it is often wiser to opt for a cut-out in each corner. This will ensure that your four poster mattress can be turned through every position, extending mattress life and ensuring you continue to enjoy a supportive nights sleep. More information on turning can be found on our mattress aftercare page.

If you’re the owner of an antique four poster bed you will probably require, along with cut-out corners, a custom-sized mattress of a non-standard length and width. Being the bed of the opulent, made prior to the onset of standardisation, these beds and the four poster mattresses that sat upon them were made to meet the unique specifications of each owner. Their often extremely grand and ornate custom detailing, as well as length and width, were made with the occupant in mind; to accommodate his or her height, the dimensions of the room in which the bed was destined to sit or purely to symbolise their status.

All our four poster mattresses can be made to your specific length and width to ensure a perfect fit. Your bespoke mattress will be designed specifically for you and made by hand by one of our highly skilled craftsman. We only use the finest natural materials such as cotton, lambswool, horsehair and cashmere to fill our mattresses, which when used alongside our pocket spring system, provide you with ultimate comfort and support for a great night’s rest.

How to measure an antique four poster bed

In older four poster beds there is a tendency for the wooden frame to have warped over time. Although unlikely to affect the beds rigidity, it can mean that dimensions vary depending where on the bed a measurement is taken. We would therefore suggest the length and width are taken at three separate points, and where a discrepancy exists the shorter of the three measurements is the one we use when making a four poster mattress for you. As with any bed, never measure your old mattress as this will often result in inaccurate dimensions being taken. We recommend that instead you measure the bed as this will provide an accurate measurement, ensuring your new four poster mattress is a perfect fit.

We use natural fillings whenever we can. Not only are natural materials often hypoallergenic, they are also sustainable, and can be widely recycled when your bespoke mattress eventually needs replacing.

Synthetic materials like memory foam, petroleum-based rubber and latex are non-porous, making them great materials for the production of insulation, wellington boots and birthday balloons, but should be kept outside the bedroom as much as possible. They are hot and unhygienic, breathe poorly, retain moisture and hold in heat. They also contain glues and solvents which of course evaporate creating an odour. That being said, if we were to find breathable, sustainable, man-made fibres which performed better than the fillings listed below for our bespoke mattresses we would of course consider using them: we just haven’t found any yet…

Because all of our mattresses use natural fillings, they’re hypoallergenic, non-irritable, and breathable. We use a cotton ticking to upholster our bespoke mattresses, for a most luxurious and comfortable finish.

A natural fibre which has been grown and harvested for the production of textiles and clothing for many centuries. This uniquely breathable and naturally absorbent filling is used in the construction of our mattresses due to its ability to naturally wick away moisture ensuring restful sleep.

A natural material which has played an important role in the British economy since the medieval period, and whose trade was once described as the ‘jewel in the crown of the realm’. Wool brings a number of benefits to a mattress. Unlike synthetic fibres which tend to trap and hold moisture and heat, wool’s structural composition makes it great at regulating temperature. Wool, like cotton is also incredibly breathable, wicking away moisture and ensuring you stay cosy during winter months and cool during summer ones. . It is because of these properties that we use it as a filling in some of our highest specification mattresses.

For hundreds of years horsehair has been an important filling in mattresses of the highest specification. Before the interior and later pocket spring system were invented each strand of curled hair acted like a tiny spring, creating support and elasticity within the mattress. We continue to use horsehair today for this exact same reason – think of it as providing an extra layer of natural micro-spring close to the sleeping surface, to complement the pocket sprung system found in the mattress core. Additionally, the fluted structure which each strand forms channels moisture and heat away from the body while you sleep, replacing it with cooler, fresher air over the course of the night.

The coat of the Kashmir goat is considered one of the most luxurious wools available, its fine fibres – half the width of sheep’s wool- make it incredibly soft and springy to the touch and therefore one of the finest fillings that can be used in your mattress.

The goats take their name from the Kashmir region in the Indian subcontinent in which they were first found, an environment which is subject to extreme fluctuations in temperature. Cashmere, like other wools, is therefore an excellent regulator of heat. It is best to think of cashmere as a natural, silent air conditioning unit built into your bed, the structure of each hair is such that it directs heat along the fibre to be released into the cooler environment. When it is cold, cashmere’s crimp – the natural waviness of each hair – traps large volumes of air between its fibres, creating an insulation layer which holds heat. 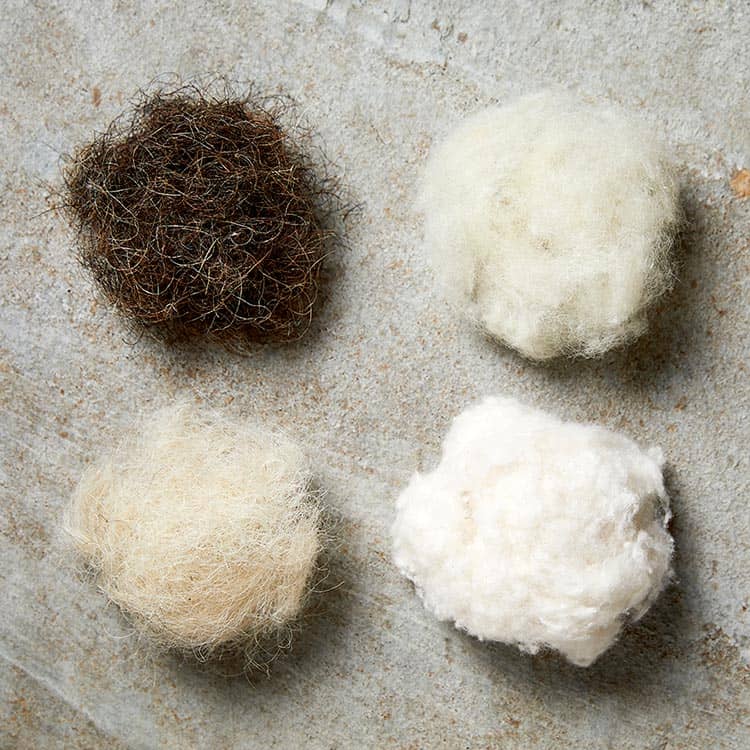 What size mattress do you need?

What's the intended use?

How much are you looking to spend?

Only the best will do!

Some lovely words from our Odd customers…

"Living on a small island we tried locally to find a firm which could arrange an order for a hand made mattress for our antique Victorian four poster bed. Having no success we didn't realize how easy it would be to order exactly what we required until we found The Odd Mattress Company on the internet. Phone calls with the factory owner were very helpful and his advise led us to choosing the ideal mattress for us. We were not only happy with the finished mattress but with the time it took to be made and the delivery arrangements which are not always easy when ordering from Jersey. We have slept so much better since making this purchase and with aching backs cured we are so glad that we discovered The Odd Mattress Company."

"Very good communication and customer service have ordered the with them on several occasions and always impressed prompt delivery ."

"I am building a four poster bed and wanted a mattress to last me ..my last special mattress...! I got through easily every time I needed to phone. I received such a wealth of helpful advice about the comfort I should expect how the matress would be made and within a cost to suit my pocket. I was told the time it would take to build my bespoke matress ( smaller than usual and with corners cut to fit) ..and it was delivered in a timely and thoughtful way, with care and consideration. I couldn't be more delighted. .. Thank you."