Can you make up for a bad night’s sleep the next day? Does waking up on the wrong side of the bed really spoil your mood? Do you really fewer hours of sleep as you get older?

There are many myths about sleep, ranging from plausible but wrong assumptions to outright bizarre theories. In this chapter, we take on four of the most believable, but still completely incorrect theories about getting a good night’s sleep.

When you sleep, your brain rests

Think sleeping gives your brain a break? Think again. Although medical science up until the 1950s reflected the idea that sleep was a neurologically passive activity, it now shows the exact opposite: that our brains are very active while we’re asleep.

When you fall asleep, your brain goes through five different sleep phases in a cycle that repeats itself throughout the night. The sleep cycle begins with stages 1 until 4, before moving into REM (rapid eye movement) sleep.

During the different sleep stages, we behave differently. In stage 1, for example, we wake easily when our sleep is interrupted by loud noises or bright. In stages 3 to 4, which are the stages of deep sleep, we are far less likely to wake accidentally.

Each sleep stage is equally important, and a typical night’s sleep involves our bodies cycling through the states several times. In addition to being equally important, each of the stages of sleep has its own type of distinct, unique brain activity:

Since the later stages of sleep involve such deep brain activity, people woken at this point often feel drowsy and disoriented. Many people who wake up feeling drowsy and unenergetic feel this way because they were woken during deep sleep.

It’s a favourite cliché: we stumble out of bed at 10 am as teenagers, and wake up at the crack of dawn in retirement. While it may seem true, do we really need to sleep less when we’re older than we do when we’re young?

Scientists believe a variety of factors affect our sleep patterns as we age. University of California Professor Sean Drummond believes that older people should sleep just as much as they did when they were young. He says:

“[The right amount of sleep] varies from person to person but whatever you slept when you were 35 should be the same from 75. The problem is people find it harder to sleep as they get older and they think that this is a sign that they need less sleep, but that’s not the case.”

Turning back our alarm clocks as we age is also linked to our circadian rhythm – the natural body clock that governs our feelings of alertness and tiredness. The older we get, the more our body clocks adjust for sleeping and waking up at an earlier hour.

While our body clock begins to wind backwards as we age, it leaps forward during adolescence. The old cliché of lazy teenagers may be primarily biological. Teenage males in particular are often affected by delayed sleep phase disorder – a circadian rhythm sleep disorder that makes them rarely feel tired before midnight.

Despite our body clocks changing as we age, the amount of sleep we need changes very little from adolescence to old age. Instead, what changes is the time of day we begin to feel tired and our natural wake-up time.

Napping is only for babies 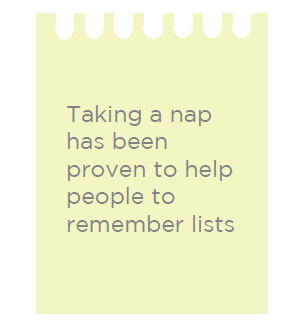 Modern medical science is increasingly showing us that the siesta – the afternoon nap that dictates work hours in many Spanish-speaking countries – has numerous health and productivity benefits.

A 2002 study by Harvard University showed that long work hours made employee burnout occur towards the end of the afternoon. A 30-minute nap in the middle of the day resulted in far steadier productivity throughout the workday.

Interestingly, a one-hour nap in the middle of the workday resulted in afternoons which were more productive than the mornings. While your boss probably won’t approve, napping in the afternoon certainly isn’t just for kids.

Waking up in the middle of the night is bad

Do you occasionally wake up in the middle of the night? Don’t worry. Not only is it entirely normal to wake up during the middle of your sleep cycle, it’s also harmless and – in some cases – good for your sleep quality.

A study conducted by Dr Thomas Wehr of the US National Institute of Mental Health in the early 1990s found that when people were exposed only to natural light, their sleep patterns naturally split into two four-hour segments separated by an hour of peaceful wakefulness in the middle of the night.

Historians also believe that, prior to artificial lighting, humans spent their nights in and out of bed. Historian Roger Ekirch has spotted a consistent pattern throughout historical diaries and literature indicating that waking up in the middle of the night – and in some cases, even visiting neighbours – was once perfectly normal.

Whether you wake up at 1 am or 4 am, don’t think that there’s anything unusual or unhealthy about your sleep patterns. From Ancient Rome to the modern day, there are endless records of people waking during the night while sleeping healthily.